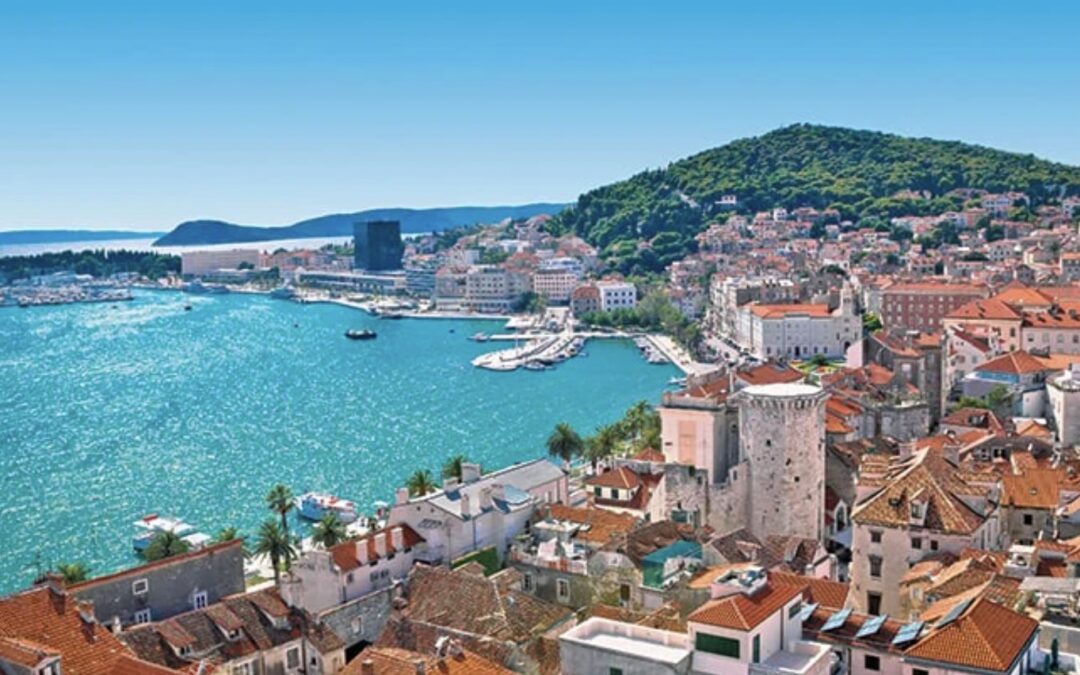 Split, Croatia’s Dalmatian capital, might just be the hottest low-key travel destination that travelers of all ages seem to be craving. And why wouldn’t they? There are beaches, fresh fish, as well as history, tradition and restored architecture around just about any corner.

We visited Split in mid-June and found it to be empty enough that it was easy to see the life of the city, but right before the peak vacation months of July and August. In other words: No long lines or waits — just about the perfect timing.

Descending into Split Airport (Zračna luka Split) is a little treat in and of itself. From high up in the sky, the view is pristine: Coastline, beaches and islands as far as the eye can see, all skewed across the sparkling turquoise gemstone that is the Adriatic Sea. Once arriving in the city center, it’s easy to quickly understand the appeal of the place. After an approximately 30-minute ride, coach buses drop passengers off along the main port. Now that you’ve arrived, let’s cut to the chase: The first thing to do is hit the beach. Bačvice Beach is the livelihood of the city’s seaside culture, with bars, restaurants, clubs and ice cream parlors lining the boardwalk; and then there is Ovčice Beach, which is more secluded and private, though a bit of a further stroll along the coast.

For a classic and traditional bite to eat, Fife is your calling card. A late-night, reservation-only, buffet-style restaurant seated one block over from the city’s harbor, here hungry travelers can try some of the best traditional Croatian favorites, from a variety of meats and fresh fish to goulash, risottos and the house specialty of pašticada with gnocchi — a marinated beef stew made with nutmeg and prunes. For a digestif, try one of the various Croatian rakija, the native drink of choice. Given that this address serves up some of the best of Croatian tradition, visitors can be sure to be seated among locals and tourists alike.

Day Two, it’s time to head to the heart of it all: Roman Emperor Diocletian’s Palace, which may as well be a city in itself. Originally created for the Emperor in 295 AD, the old city of Split was constructed for his retirement. The inner workings of the old city are intricate — filled with narrow cobblestone streets and high arches — and despite their age, are well intact.

The hyper-center of the old town is Peristil Square, which was originally used for celebrations to honor Diocletian as the living son of Jupiter. Across from the steps of the square is Lvxor Café & Restaurant, rumored to be one of the oldest bars in the city and named for the Egyptian city of Luxor. Several stone sphinxes constructed during the reign of Pharaoh Tuthmosis still sit within the Square, with the one best preserved said to be “the guardian of the imperial square,” as it watches over the city of Split and one of its most historic monuments: Diocletian’s Mausoleum, also known as the Cathedral of St. Domnius. Near the square and the cathedral are the Split Ethnographic Museum (Etnografski muzej Split) and the Split City Museum, both great for tourists curious to learn more about the city’s culture, traditions and history.

Mazzgoon is located within  the heart of the Diocletian’s Palace. Here one can savor modern cuisine in company of 16th-century architecture. // Photo by Maksim Basic

Mazzgoon is the place to eat within the palace’s walls. Located within the heart of the palace, guests can enjoy modern fare on the front terrace while in the company of 16th-century architecture, where live music is often played on the streets. The menu is compiled of a long array of original cocktails and contemporary-style food items, from local cheeses, fish and meats to Croatian-style tiramisu and semifreddo, perfect for cooling off after a long, hot summer day.

Craving some nature? Go for a hike through Marjan Forest Park, which sits atop Split city. Along the trails, there are various signs leading to vista points. From certain areas, you may even be able to see across to Bosnia and Herzegovina, which is only a three-hour drive east of the city. When it’s time to make the trip back down, stop at Cafe Vidilica. This spot is frequented by many, whether it be for a drink, dessert or quick photo op, as the view of the city below, the neighboring mountains in the backdrop and the sea on the edge of it all is enough to leave one speechless. While nature is on the brain, it is imperative to visit two of Croatia’s most famous national parks: Krka Falls, about an hour and 15 minutes from Split via bus and known for its many waterfalls and crystal-clear swimming holes, and the Plitvice Lakes, which have UNESCO World Heritage status and are situated about three-and-a-half-hours away by bus. Welcoming over 1 million guests per year, the lakes are famous for their breathtaking cascades.

Meanwhile, back in Split, it’s time to decide where to spend the night. There is the four-star Vida Boutique Hotel, situated, like Mazzgoon, within the confines of the historical center. Set in an ideal location, Vida is only a few minutes’ walk from many tourist attractions, like the Diocletian’s Palace, Marjan Park, the Bačvice beaches and more. This boutique hotel has just 13 guestrooms, making it an intimate choice for travelers. For more details or for booking your stay, contact WGY Travel

The Vida Boutique Hotel is a four-star, 13-room hotel in the historical center of Split.

Looking for a bit of a calmer environment outside of the city center? Try Briig Boutique Hotel, located right along Bačvice Beach. There are a variety of rooms here as well, but the top-floor Executive Suite offers a terrace with a built-in, private Jacuzzi. There are also food and drink options on-site at the Median restaurant and the BarCaffe Bar, along with a rooftop pool with views of the Adriatic, a fully equipped gym, and a hotel spa that offers massages and a sauna. For any questions, contact Tea Mateta (info@briig-hotel.com), Briig’s sales and marketing assistant.

When it’s time for a brief change of scenery, and you’re itching to get off the mainland, take a Jadrolinija ferry to one — or several — of the various neighboring Croatian islands. There are Brač, which has the best ferry lines to and from Split and is home to the white-pebbled Golden Cape (Zlatni Rat) in Bol, said to be one of the most popular beaches in Croatia; and Vis, one of the smaller of the Croatian islands, easy for getting around and visiting some of the island’s famous bays and coves via rental boat, among others. But there are two islands on the very top of our list.

The Briig Boutique Hotel’s BarCaffe Bar extends to the terrace, allowing guests to enjoy their coffee while taking in the sights of the city.

Your first stop? Hvar, for top-notch seafood at Konoba Maestro, a little restaurant hidden along one of the elevated side streets of the city’s center, owned and managed by three brothers who go out to find their fresh catch every morning; for some live-DJ action, fun and dancing for all ages at Hula Hula Beach bar, located about 15 minutes away from the city center by foot and situated right on the waterfront; for hiking and incredible views from the top of the city’s fortified Fortica (Spanjola, in local language), or Spanish fortress; and for long, relaxing days a bit away from the buzz of the city spent at the Hvar Ranta beach. For ultimate relaxation, reserve a couple of nights at Adriana, Hvar’s boutique spa hotel located directly in front of the marina and in the center of the old town.

The Briig Boutique Hotel’s top-floor Executive Suite has a terrace with a Jacuzzi.

Three or four days should do the trick in Hvar, then it’s time to hop back on the ferry toward Korčula, one of the smaller, more traditional islands. Making a pitstop here is perfect if Dubrovnik is on your to-do list, as the island is the closest to the southern Dalmatian city and lies between an hour and 45 minutes to approximately two hours and 35 minutes by ferry, depending on the route. But while you’re still in Korčula, visit the house where Marco Polo grew up (yes, the Marco Polo!), walk to the top of St. Mark’s Cathedral for views of the old town, the sea and the neighboring mountainous island of Orebić, and eat dinner at Škver, a favorite traditional Dalmatian restaurant to many locals. Stay at The Fabris – Luxury Inn in the center of the town and wake up to views of the seaport and palm trees.

Still craving some relaxing beach days? Not to fear: Korčula has some beaches and ports along the coastline that aren’t too hard to find, despite their quaintly hidden nature. Nevertheless, it’s worth the mini-treasure hunt — once in the water, it’ll feel like you are swimming in liquefied jewels, and we’ve got two words for you: Pure bliss.

For More Information on Croatia – or any other destination in your bucket list – Please reach a WGY Travel Advisor at 888-WGY-0808 or Email: Request@wgylifestyle.com and our team will help you customize your perfect getaway!